Session 2 – April 2, 2018 – UofU Osher – Earth Science Outside. DRAFT for some details but logistics are solid.

NOTE: There’s generally parking available along 400 South between 9th and 10th East and along 10th East between 4th and 3rd South. The park is an easy walk from the TRAX station at UofU Stadium Parking. 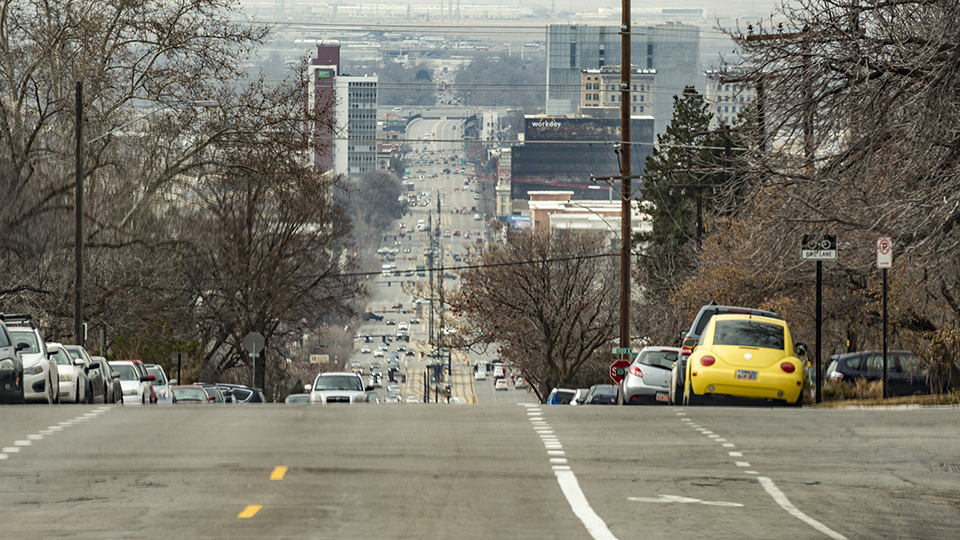 NOTE: For the lecture, we’ll sit at the picnic tables and extra lawn chairs will be provided.

NOTE: The mapping exercise takes about a half hour. We will walk around this block. Participants will use colored pencils (provided) and a blank map (provided) and be citizen scientists, mapping this expression of the Wasatch Fault.

No alternate site will be posted until we know for sure bad weather. Check back the Saturday before class.

1:30 PM — Welcome and Step One of Landscape Literacy… Breathe! and Be mindful of patterns.

BasinAndRangeFromSLCounty-AWolcott-2018-BasinsAndRanges of Basin and Range.

Dance of the Plates (note: content and links are below).

Reenactment of the evolution of the Basin and Range region (Genevieve’s blocks).

2:30 PM — Participants as Earth scientists. Map the fault that cuts this city block… with supervision.

Participants should be confident about Step 1 of Landscape Literacy: PATTERNS. Mindful moments.

Participants should be able to practice Step 2: Deliberate awareness of PATTERNS of shapes of landforms and interconnections to the five subsystems of Earth systems (geosphere, hydrospere, atmosphere, biosphere, and anthrosphere).

Participants should appreciate the importance of tectonics to Utah’s landscapes. Tectonic forces largely set the stage for regions by changing what is high and what is low. Then agents of erosion / deposition modify the scene.

Why do physiographic provinces differ from each other?

This course asks participants to appreciate how Earth scientists have pieced together the geologic history of Salt Lake County as nine chapters. We live in Chapter 9: Now! Stretching to the West. This chapter, based on tectonics, began about 22 million year when tectonics shifted from dominated by isostatic adjustments (sorry for jargon) and igneous activity to active stretching westward (extensional tectonics). Chapter 9 Now! Stretching west is … now…  and continues through the present and beyond.

Chapter breaks are based on tectonics. If you knew the OLDEST units that were faulted by extensional tectonics, wouldn’t  you know the beginning of the pulling apart of the Basin and Range? Based on evidence of western Utah, extension began about 22 million years ago. By about 5 million years ago, we would recognize the major mountain chains and valleys of our Basin and Range. There is no evidence of how long this chapter will last.

The Wasatch fault is a Chapter 9: Now! Stretching to the West feature. It lies along the Wasatch Line a zone where Earth has accommodated change for half a billion  years. The Wasatch Fault zone is due to tectonic extension.

Consider Mount Olympus. The bedrock of Mount Olympus happens to be from Chapter 2 – Metamorphism Lite and Chapter 3 – Shallow Seas. Don’t confuse the age of bedrock of a feature with the age of a feature. Faulting along the Wasatch Fault drops the valley down and is what makes the landform (Mount Olympus). Mount Olmpus, the landform, therefore is a Chapter 9 feature! Same with Antelope Island. Same with the Oquirrh Mountains.

How about here at Faultline Park. As we walk around the block and witness patterns of topography, and vegetation, and urban development… decide in your mind whether the fault we are mapping cuts sediments, specifically, does it cut sediments of Lake Bonneville of about 15,000 years ago (not long ago… basically the present). What do you wonder about that?!

From our Session 1: “Landforms are generally young compared to the bedrock they are made of. Antelope Island and Stansbury Island are both Chapter 9 – Now Stretching West landforms. Antelope Island’s bedrock is very old (Chapter 1 – Metamorphic Basement) and Stansbury Island’s bedrock is Chapter 3 – Shallow Seas. But the islands are young features. The islands are ranges of the Basin and Range surrounded by low places due to extensional tectonics of Chapter 9 – Now Stretching to the West.

Repeat to remember, Remember to repeat. 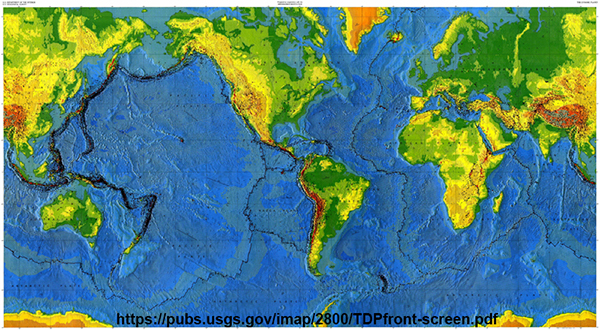 Click HERE for USGS pamphlet explanation (excellent) This Dynamic Earth. One map from that pamphlet: 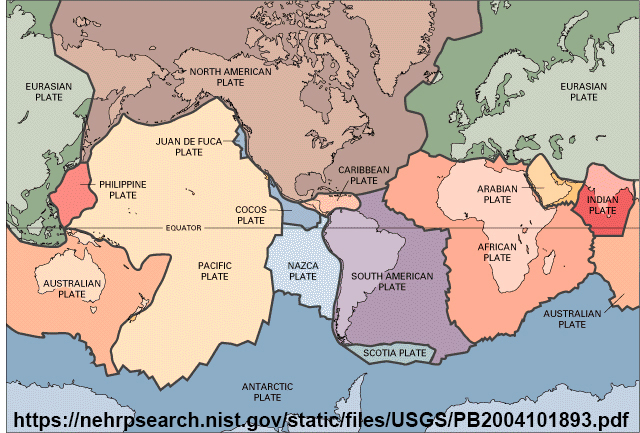 Content: Physiographic provinces are drawn based on patterns of LANDFORMS, the cumulative effects of Earth science processes.

Today (meaning Chapter 9 – Now, Stretching to the west), the Basin and Range physiographic province is being pulled apart due to extensional tectonics (!) while the Rocky Mountain and Colorado Plateau regions are tectonically stable in comparison. GPS units measure movements, for example, a place on Antelope Island is moving west faster than those of the Uinta Basin. 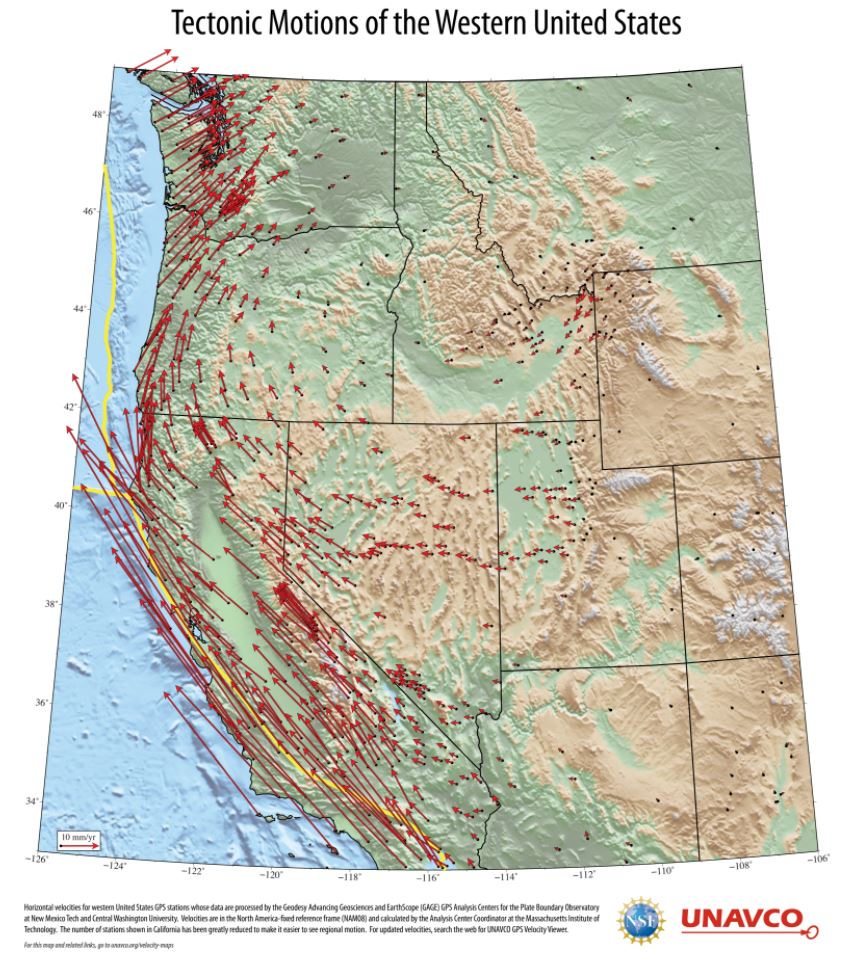 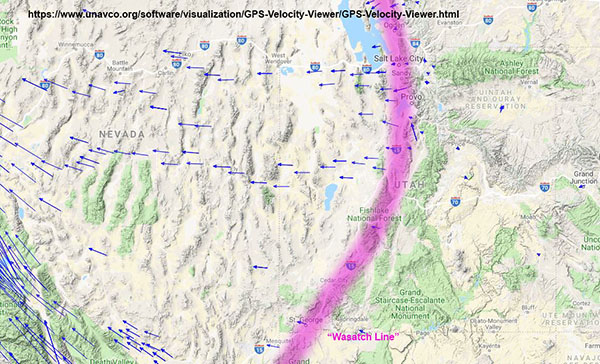 The arrows show direction of movement of GPS stations and their relative speed. Note the patterns of the arrows west versus east of the Wasatch fault.

Content: Earth is not getting noticeably bigger or smaller. If Earth’s surface is getting shorter in some regions, it will be getting wider in others (extensional tectonics).

Imagine the geometry of a set of three blocks. When the two end blocks are pulled apart, the central block drops. 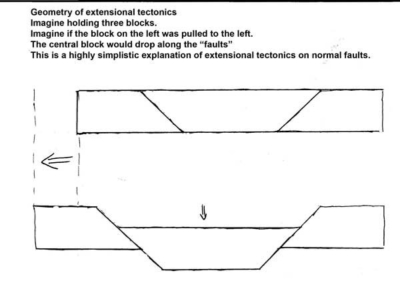 Content: Next step… think of the basins and ranges of the Basin and Range as a series of wooden blocks 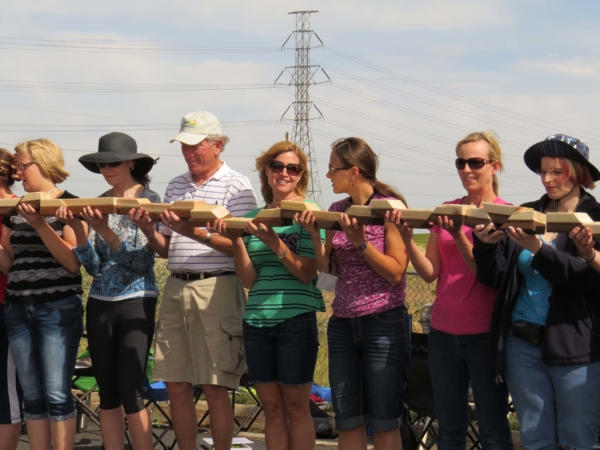 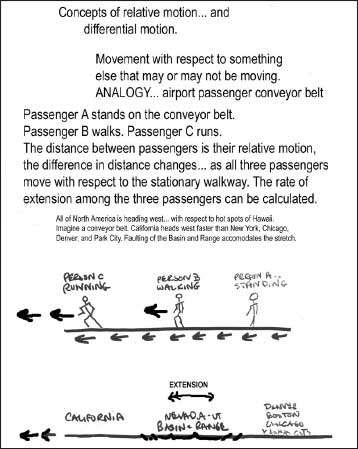 About twenty million years ago, none of the features that make up the surface of Salt Lake County had been formed. Their bedrock was there, having been formed in previous chapters but the landforms that we see today, such as the ranges and basins of the Basin and Range were not there yet. The LANDFORMS, such as Antelope Island and Stansbury Island, (careful… that’s the SHAPES on the surface of the land) are rarely the same age as the BEDROCK they are made of. Tectonics Rules!! Extensional tectonics of what we are calling “Chapter 9 – Now! Stretching west” created the Basin and Range including the Salt Lake Valley and the Wasatch Front. 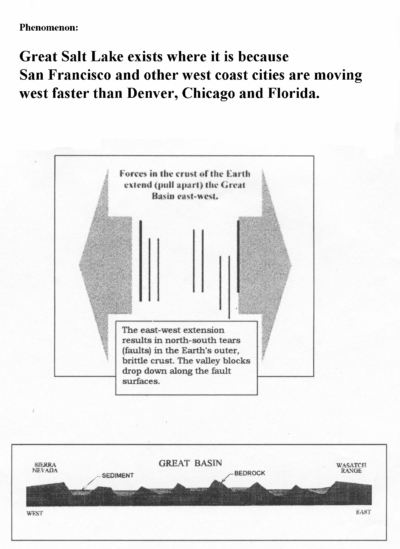 Content: Physiographic regions are based on patterns of landforms.

Think about what you know of differences of patterns of landforms of the Basin and Range and, for example, the Colorado Plateau region.

Tectonics rules! The active tectonics today differs for the Basin and Range versus the Colorado Plateau.

A challenge question: how does the contrast of active tectonics affect the citizens sense of hazards? 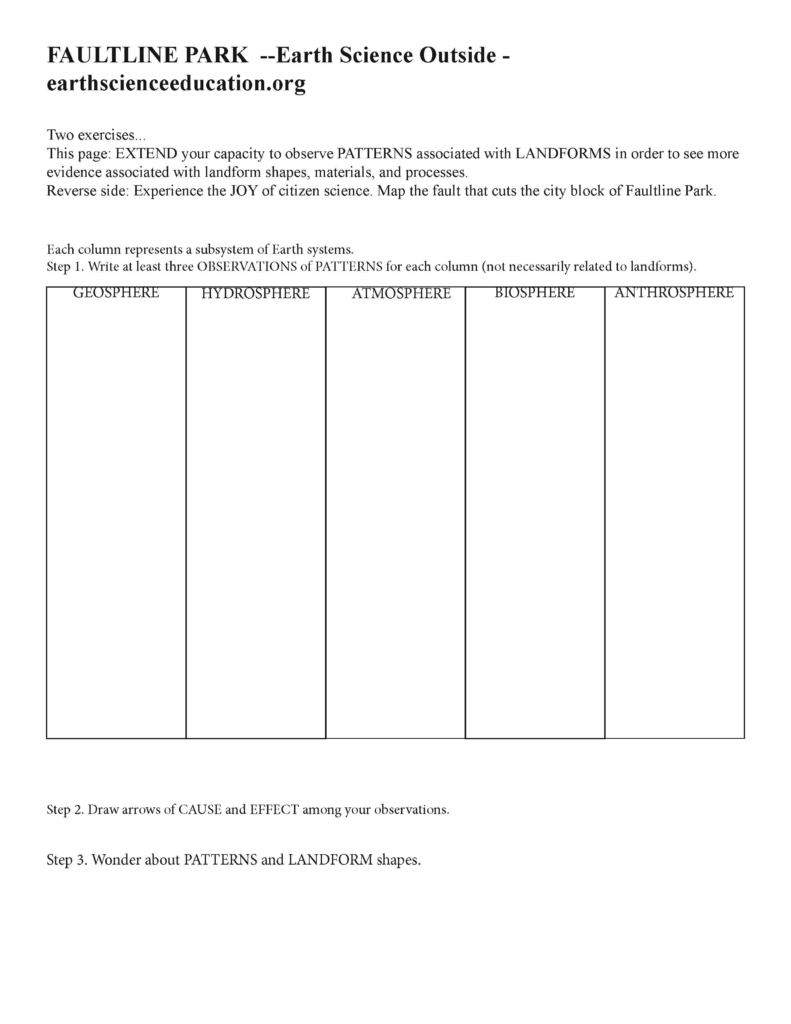 Page Two: Map the fault that cuts through the city block of Faultline Park. 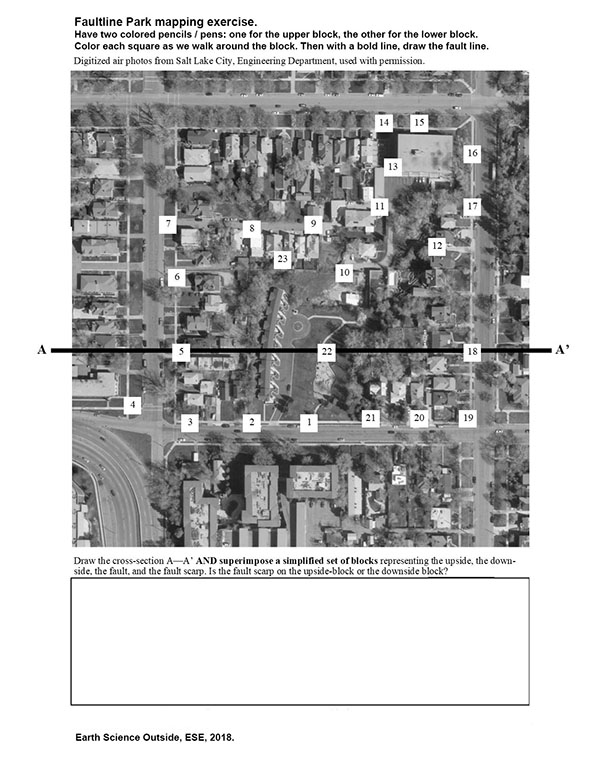 Participants should have a heart-beat understanding that extensional tectonics results in down-dropping of “blocks” of western Utah’s crust resulting in the Salt Lake Valley, the Oquirrh Mountains, and the Wasatch Range.

Participants should be able to explain to each other why the age of most LANDFORMS they know and love is younger than what the LANDFORM is made of: Mount Olympus, Farnsworth Peak, Ensign Peak, and… The Wave, Zion’s White Throne, … .

Next session, Session 3 – Patterns of Bedrock at the mouth of Parleys Canyon.

Content: Using the simple concepts of superposition, cross-cutting relationships, and original horizontality… you too can figure out age relationships of bedrock units at Parleys Canyon. JOY!