Meet at: the bench overview at Popperton Park.

Address: Approximately 410 N Virginia St, SLC, 84103, about a block uphill from the intersection of Virginia Street and 11th Ave.

NOTE: Park along the street, I suggest on the “houses” side of the street (north side) so vehicles don’t block our view.

NOTE: No walkabout today. We’ll have lawn chairs, and there’s a bench. If  you have a favorite chair it’s fine to bring it.

NOTE: Safety first. ALL outdooractivities have inherent safety concerns. Be prepared with sensible shoes,clothing appropriate for weather (the forecast is WINDY), etc.  SAFETY is a group endeavor. Speak up for safety! There’s never been an issue at this site, let’s keep it that way.

Map showing location of the bench of Popperton Park.

Drive, safety first but be mindful of topography. 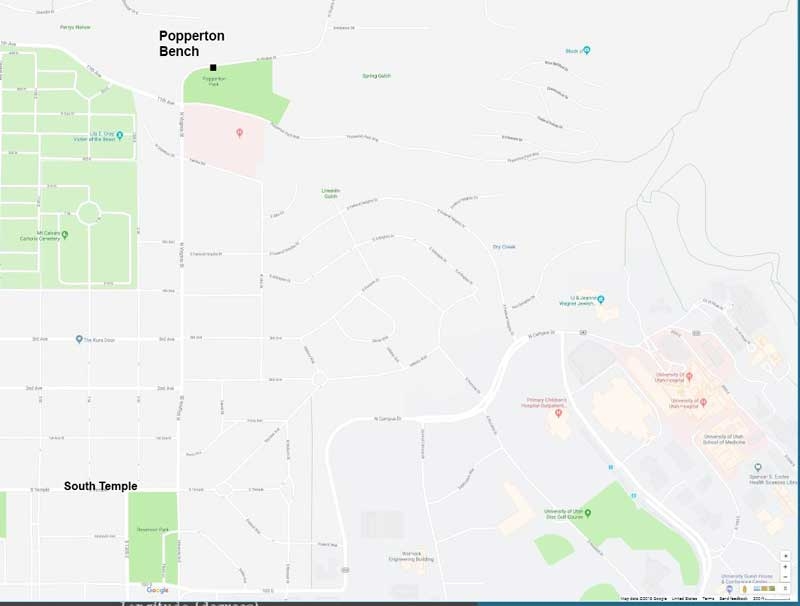 No alternate site will be posted until we know for sure bad weather. Weather looks windy but Okay. But check back the Sunday as the weather is erratic.

Repeat to remember, Remember to repeat: Five steps toward the JOY of landscape literacy. Today we focus on Steps One, Two, Three, … and Five.

1:45 PM — Review the rules of younger than / older than (Superposition, Cross-cutting relationships, Original horizontality vs tilted.)

2 PM — Major concepts: Erosion versus deposition. Environments of deposition. Evidence of the role of water on Earth’s surface.

By the end of Session 4:

Participants should be adept at taking their time to relish Step 1 of Landscape Literacy: PATTERNS. Mindful moments. The patterns of the basins and ranges of the Basin and Range should make sense. They should be able to explain ranges as relatively high places due to the down-dropping basins.

Participants should be able to apply rules for “relative age” meaning younger than / older than to landforms and sediments seen from Popperton Park.

What are landforms? What are physiographic provinces? What is bedrock versus sediment? Erosion, transport, and deposition. What is meant by an “environment of deposition.”

What sediments do you see… or know they must be there? 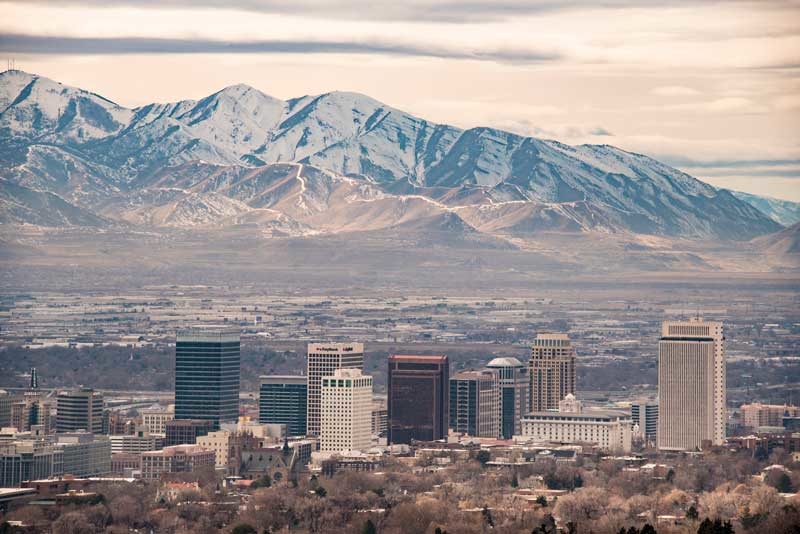 View far to the south.

Look south from Popperton Park and identify diverse environments of erosion and deposition. 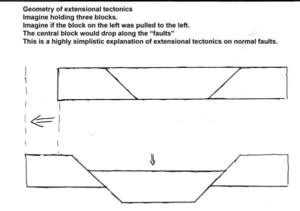 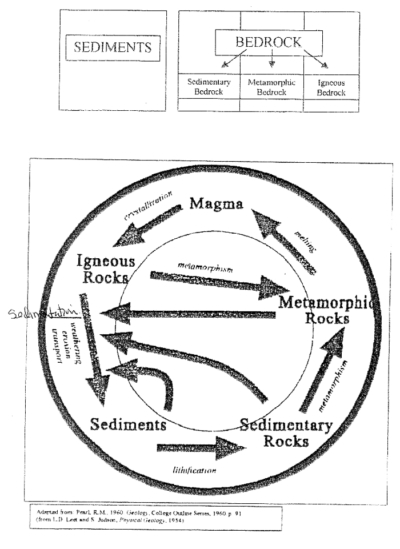 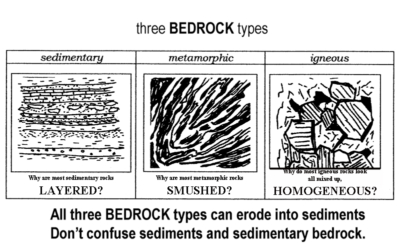 Once they are separated from the bedrock and moved more than a couple inches by wind, water, glacial ice, ground failure of humans, we call the loose material “sediment.” Please avoid saying “igneous sediment” and say instead “sediment that came from igneous bedrock.” Why do I teach this as hugely important when others don’t? Because understanding of processes leads to greater comprehension than being able to identify the names of rocks. The process is the rock cycle with its diverse sub processes. Today we study the processes of sedimentation: how bedrock and sediments get reworked by weathering, erosion, transport and deposition to become deposits of sediment. Weathering is the loosening of materials from bedrock but does not involve picking the materials up (erosion), moving them (transport), and dropping them (deposition).

Imagine: what do the rock materials in a stream look like? For example: how do the sediments at Alta’s Little Cottonwood Creek differ from those of the Jordan River downstream?

What about a lake? What shoreline processes act along the shores of lakes you know about such as Great Salt Lake?

What about an ocean? Have  you been to beaches of Oregon? South Carolina? the Mediterranean Sea? Think about the contrasts.

How about to the shores of Lake Michigan or Lake Superior?

Lake Superior in the winter: Image from NASA image of the day. CLICK HERE

Content: Lake Superior’s environment today is the modern analogue to Lake Bonneville’s environments of deposition during the Ice Ages.

Imagine the lake effect! and think the same for Lake Bonneville. CLICK HERE for another NASA image of the day

The muds of coastal floodplains become shale. What kind of bedrock could the muds under Great Salt Lake become?

Stream deposits with pebbles or cobbles (melon size) become conglomerates. Stream deposits with almost exclusively sand can become sandstone. Where in Salt Lake County are there stream deposits? If  you had to guess the future, which of the following stream environments of today will become the bedrock of the future and why? (1) the Jordan River where it enters Great Salt Lake; (2) the Jordan River where it enters Salt Lake County from Utah County? (3) Little Cottonwood Creek’s cobbles at Alta? (4) The stream deposits of Parleys Creek at the mouth of Parleys Canyon? Of course I am interested in your logic.

Look south from Popperton Park and identify diverse environments of erosion and deposition. A Wolcott, 2018.

Step 1. Breathe! Notice patterns of bedrock and sediment in the foreground (this site is more complex than it may appear).

How might  you figure out how high the Ice Age Lake Bonneville once was in Salt Lake County?

Enjoy recognizing those relationships: For example, If there are gullies into the sediments of Lake Bonneville here at Popperton Park, what does that indicate to you?

Add other relationships of younger / older that you see here or might look for.

Quiz… and then add some questions of  your own.

What evidence indicates the sediments in Salt Lake Valley, and in the canyons today are younger than the youngest bedrock of the valley and the canyons?

What evidence was there that the tilting of the rock units of the Oquirrh Mountains happened long before Lake Bonneville?

What evidence would you look for to determine whether faulting along the Wasatch Fault has happened more recently than Lake Bonneville’s highstand shoreline?

How would you figure out what the environment of Lake Bonneville was like during the Ice Ages.

Here’s an image that contrasts the two… from Utah Geological Survey Map 73. Don R Currey mapped these levels in the field. What evidence did he use?… or would you use? 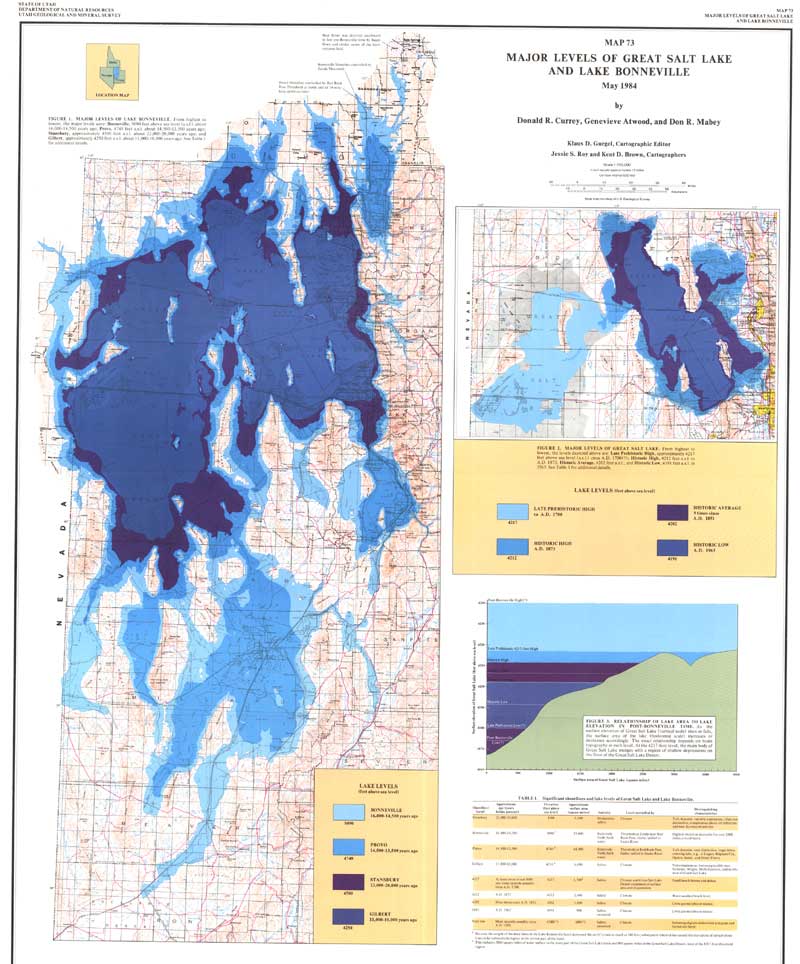 Next session, Session 5 – Next to the final session… starting to pull it together.